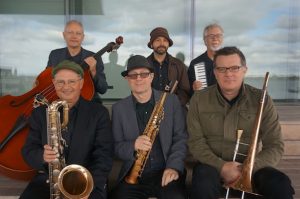 The Silent Six is the band that performs with Wordless!

“While this was have-a-good-old-timey music, that spirit belied its complexity and the long-developed rapport of the sextet in performing it…” –Andrey Henkin, THE NEW YORK CITY JAZZ RECORD, Page 4 JULY 2019

In Wordless!, The Silent Six turn on a dime between 20s jazz, New Music, tango, avant garde styles and film music in order to accompany the 15 graphic sequences in the show. Now, whenever possible, the band has been performing on its own, playing music that unites all of Johnston’s historical musical vehicles. Almost all of these great players are band leaders in their own right (except for Hofstra, the preeminent sideman) and bring their own unique musical personalities to this widely varied music.

“There are many jazz clubs to choose from when visiting New York City, but seasoned fans should make Smalls a high priority. It lacks fancy decor but its main focus is creating an intimate listening environment: minimal conversation, good acoustics and great musicians. Johnston brought a mix of new and old compositions for his only U.S. booking last month. He alternated between soprano and alto saxophones throughout both sets, joined by bassist Dave Hofstra and baritone saxophonist Michael Hashim, both old friends and fellow veterans of The Microscopic Septet. The band also included Joe Fiedler, the trombonist from Fast ‘N Bulbous; Neal Kirkwood, a pianist who often subbed in the Transparent Quartet; and drummer Rob Garcia.

A lot of Johnston’s music is inspired by traditional jazz, but adds frequently dissonant, witty solos and unexpected twists. A rollicking rendition of Jelly Roll Morton’s “Frog-I-More Rag” took the early master’s music into the 21st Century without losing its essence. “Regrets #17”, which came from the aforementioned Diggin’ Bones CD, was a swaggering blues shuffle with terrific interplay between Johnston and Hashim. “The Dream Detective” added a second baritone saxophonist, Dave Sewelson, another Micros alum. It was fun to hear early Duke Ellington works like “Awful Sad” played with such enthusiasm, showcasing Hofstra at length. “Planetella Rock” was a perfect closer, a hip Johnston blues interpreted with lots of soul by the band.”

And here is a link to the Jazz Lives website, with some video clips from that gig.