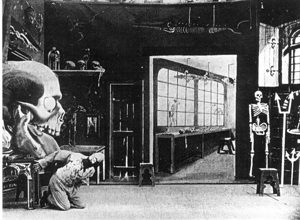 The films of Georges Méliès, one of the cinema’s earliest visionaries, have inspired filmmakers for over 100 years. Practitioners as diverse as Charles Chaplin (who described Méliès as “the alchemist of light”), René Clair, Salvador Dali, Ray Harryhausen, Terry Gilliam, Tim Burton, and of course Martin Scorsese. Scorsese’s Golden Globe winning film Hugo, based upon the Caldecott Award winning book by Brian Selznick, The Invention of Hugo Cabret, is a love letter to the film medium itself, and centers around the life and films of Georges Méliès, who is featured as a central character in the film.

The program lasts between 70 and 80 minutes, and consist of eight films, varying from 1 minute to 20 minutes in length. The music is performed by the composer with a four-piece ensemble (soprano saxophone, piano, vibraphone, and double bass), consisting of some of Australia’s finest musicians.

Since its premiere at New York’s Lincoln Center in 1997, it has been performed at the Teatro Verdi in Florence, Italy, the Cleveland Institute of Art, the Wexner Center, the Erie Art Museum (all in the US), and the Sydney Opera House, Revelation Perth Film Festival and Woodford Folk Festival (all in Australia).

“The sly, quirky eccentricity of the Transparent Quartet seems more appropriate to the rhythms of a Martin Scorsese film, though it’s George Melies who is the object of concern. The eight pieces have a sense of chamber structure and fugue-like ensemble not unlike the MJQ. Overall, a charming and absorbing piece of work.” 4 Stars. –John McDonough, Downbeat

“Johnston is a composer of considerable wit and seemingly boundless imagination. The wit, which permeates the music like the smell of good coffee does a café, mostly manifests itself in the unlikely textural combinations he draws from his band, the Transparent Quartet. . . The music defies ready classification…Overall this has as much in common with, say, Erik Satie, as it has with jazz, and certainly the emphasis is on composition rather than improvisation–compositions which form a chain of constant surprises.– John Shand, Sydney Morning Herald

The music for this program is available on CD on Asynchronous Records.