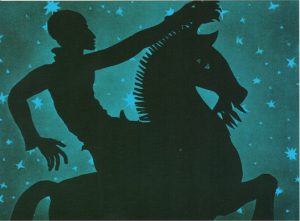 The Adventures of Prince Achmed (1926) is a silent silhouette animation by Lotte Reiniger, considered by many to be the first feature-length animated film. Influenced by Georges Méliès (Voyage dans la lune) and Paul Wegener (Der Golem), Reiniger had an astonishing facility with cutting–holding the scissors still in her right hand, and manipulating the paper at lightning speed with her left hand so that the cut always went in the right direction. She drew the storyboards and devised the plots and characters, which were closely linked[1]. William Moritz describes it as “a brilliant feature, a wonderful film full of charming comedy, lyrical romance, vigorous and exciting battles, eerie magic, and truly sinister, frightening evil.” 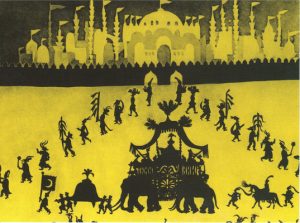 The score for Prince Achmed again represents a new approach to music for silent film. Combining electronic and acoustic instruments, the score is structured around a pre-recorded score of sampled electronic loops and percussion. Against this, a live band will perform, consisting of two keyboards, soprano saxophone, & trombone. The music is through-composed, seasoned with elements of improvisation, and invokes elements of jazz, blues, minimalism and classical music. 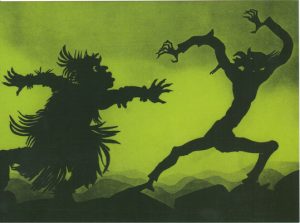 Taken from The Arabian Nights, The Adventure of Prince Achmed tells the story of a wicked sorcerer who tricks Prince Achmed into mounting a magical flying horse and sends the rider off on a flight to his death. But the prince foils the magician’s plan, and soars headlong into a series of wondrous adventures — joining forces with Aladdin and the Witch of the Fiery Mountains, doing battle with the sorcerer’s army of monsters and demons, and falling in love with the beautiful Princess Peri Banu.

The story is one that will appeal to both young and old, with a strong narrative, surprising twists and turns, and beautiful images that inspire awe and wonder. The program runs a little over an hour in length.

“Johnston’s soundtrack adds an extra dimension to the 2D-nature of the animation, with energetic jazz layered over the pre-recorded percussion track that builds up and flows through the film. While Johnston and Reiniger’s compositions are each complex in their own ways, they come together simply and beautifully, stripping animation back to its abstract qualities of light, shadow, image and sound.” –Anna Madeleine, The Guardian, 19 Jan 2015

Click here for a sample of Prince Achmed with score.