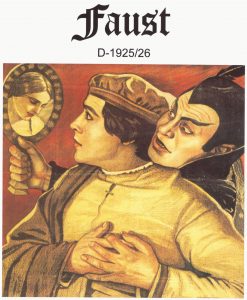 This 1926 German Expressionist silent film, starring Emil Jannings, Gösta Ekman, and Camilla Horn, was Murnau’s last German film before emigrating to America, & considered by many to be his masterpiece. It uses fantastic special effects and painterly tableaux to tell a story that is larger than life, yet tragic in its human dimensions. The themes of Fate, human vanity, individual free will, and self-sacrifice are as relevant today as ever.

The score for Faust introduces a new element, which has been used very little in contemporary silent film scores, the element of song.

The score includes both instrumental underscore, and songs and lyrical elements, which are written by  librettist, Hilary Bell. These literary elements intersect the film in non-traditional and oblique ways, as does the instrumental music for the film. In addition to songs in the style of classical art song, cabaret, jazz and polka, the singer also sings both composed vocalise passages, and vocal improvisations, scored to the film.

The score is by Phillip Johnston and the libretto is by Australian playwright and librettist Hilary Bell.